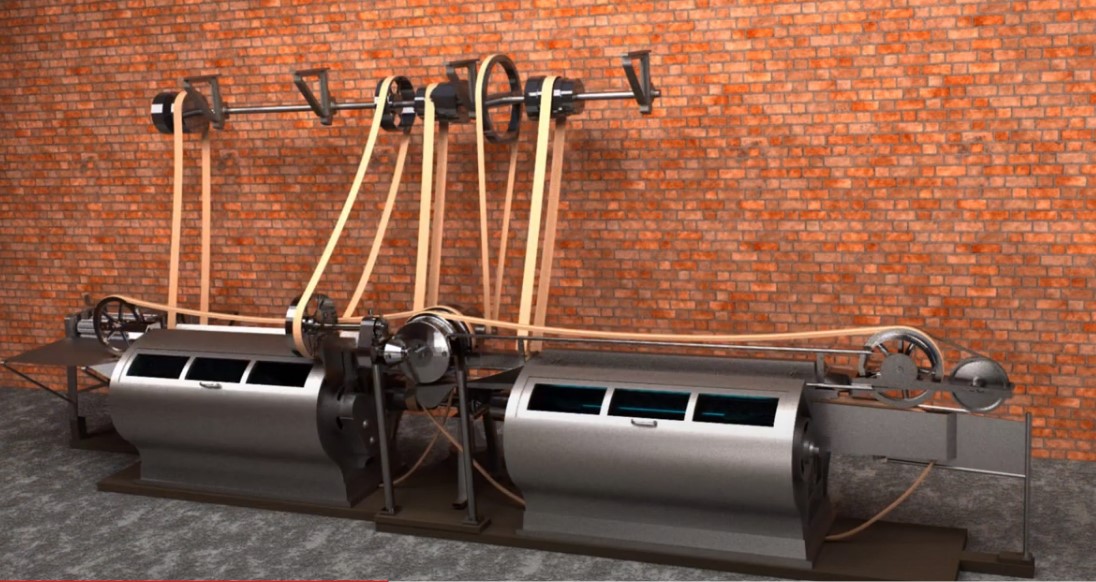 Improvement of industrial machines can be made more efficient by using simulations to test designs in a software environment before actually having to build a physical machine. Thanks to the simulation software Mpacts, the behavior of a large number of particles through machines can be simulated. Using the Discrete Element Methods (DEM), the program models particles such as Lego blocks, straw, apples.... The software also benefits from the parallelism possible of the VSC infrastructure.

About eighty percent of all industrial processes deal with particles (e.g., apples, straw, Lego blocks…). These particles need to be transported, filtered, broken, or transformed. Some examples:

•    Conveyor belts for food produce
•    Transporting/ milling and filtering of mineral ore after mining
•    Transport of crops through agricultural machines, such as wheat through combine harvesters
•    Plastic pellets in extruder screw
•    Filtering waste for recycling

Over time amazing machines have been developed to execute these industrial processes. They were constantly optimized by trial and error, a costly and time-consuming process.

Simon Vanmaercke (Co-Founder Mpacts): “Thanks to the simulation software Mpacts, we can simulate the behaviour of a large number of particles through machines, enabling the improvement of the machine by testing designs in a software environment before actually having to build a physical machine. This way is, of course much more time-efficient and cost-reducing.”

In this demo video you can see a simulation of 1927 scutching machine showing the separation of the hard core from the soft outer fibres.

Mpacts uses the Discrete Element Method (DEM) to understand, predict and solve industrial problems. DEM is any of a family of numerical methods for computing the motion and effect of a large number of small particles. [1]
Of course, to simulate many particles, a lot of computational resources are needed. To perform simulations for clients, the organization uses the VSC infrastructure.

To make the simulations faster, several paths can be taken. First, the software itself can be made more efficient and thus faster. Second, more computational resources can be used, and acceleration hardware such as GPUs can be used.

Simon Vanmaercke (Mpacts): “As a striking example of the first strategy, the experts at VSC recommended we sort the particles so that particles close in (simulated) space are also close together in computer memory. This increases the likelihood for cache hits and decreases the overall memory bandwidth.”

The effect on the computational time is illustrated in the YouTube movie for single-core performance. In GPU-accelerated simulations, the effect is much more pronounced as the memory throughput on these devices is even more of a bottleneck.
More particles can only be simulated in shorter time spans by using the parallel resources available. For ‘shared memory’ parallelism such as TBB or GP-GPU, the bottleneck for this type of simulation is typically memory bandwidth and memory latency. When switching to an MPI parallel acceleration across multiple compute nodes,  the main challenge becomes an efficient dynamic domain decomposition as the particles move across the simulated domain.

Additionally, the VSC makes it possible for Mpacts to obtain very large amounts of computational power which have GPU acceleration available.

Simon Vanmaercke (Mpacts): “Using the supercomputing infrastructure of the VSC matches our usage pattern very well. Typically, we require ‘bursts’ of computational power when performing simulations for clients. It would be unfeasible and inefficient to purchase the required computational power in-house as it would be costly to do so and idle most of the time. Working with the VSC enables us to deliver results with ‘industrial turnaround times’ at a cost that scales only with how much actual simulation work is done, not with the peak resources used. A real game-changer.”